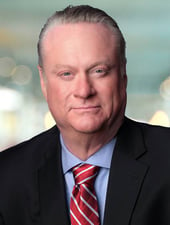 After a successful transition of authority, the Board of Directors has executed the plan for Matteson to assume the role of President and Chief Executive Officer of the credit union. “Lyn has done an outstanding job building on his track record of delivering growth and earnings in the short time he has been at Liberty Bay,” said Edward Foley, Chairman of the Board, Liberty Bay Credit Union.  “His deep expertise in business development with retail, commercial and business banking will be on display as new product offerings are introduced that will enhance our current suite of products and further assist our membership to reach their financial goals.”

“It is an honor to take over as President and CEO of Liberty Bay Credit Union,” said Lyn Matteson.  “Ed created a solid foundation and I look forward to building on Liberty Bay’s track record of success. We will deliver sophisticated, yet frictionless technologies supported by our award winning financial literacy program. Our team will introduce a variety of exciting initiatives that will be new to the credit union space and enhance our member’s experience.”

Prior to joining Liberty Bay Credit Union, Mr. Matteson has held executive positions at Upstate National Bank, RBS Citizens Bank, Charter One Bank, and Key Bank. Mr. Matteson received a Bachelor of Arts degree in Communication with a Minor in Business Management from the State University of New York, Plattsburgh.