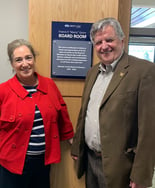 BRAINTREE, MASS. (April 18, 2019) – Liberty Bay Credit Union, one of the most established credit unions in New England, hosted its 102nd Annual Meeting of Members this Tuesday, April 16, 2019. One of the highlights was the dedication of the boardroom in the name of former Director Francis P. “Marty” Quinn, to celebrate his longstanding service to Liberty Bay.

Quinn, who served on the Board of Directors for 26 years, passed away last October. Special guest and longtime friend and colleague of Quinn, Myles Calvey, Chief Executive Officer and Business Manager of IBEW Local 2222 said, “his sincerity was always there, it was never about Marty, it was always about helping somebody else”. Quinn’s wife Nina, daughter Chandler and son John were in attendance for the dedication. Quinn’s wife was presented with a framed resolution regarding the naming of the boardroom in Quinn’s honor. Chairman of the Board, Ed Foley, and Liberty Bay Chief Executive Officer Ed Lopes also spoke to commemorate the event.

Foley said, “Marty had a unique and unmistakable character. He was on the one hand serious enough to be trusted with the Chairmanship of the Investment Committee and on the other hand one of the funniest and kindest ever to serve as Director.”

“Marty Quinn was a legendary personality at Liberty Bay. He had a humble and straightforward personality, an astounding sense of compassion, and a wry wit.  His life is so very worth celebrating,” said Lopes.